Jesus, The Opening Page for The Christian Book Era

The one single event that is the foundation of all Christian book understandings. The exact circumstance and moment of Jesus’s Crucifixion and its consequence for all of mankind.

The Passover by ancient Christian book tradition remained celebrated on the fourteenth day of the month. At that time, the crucifixion of Jesus would have occurred on Friday the thirteenth.  According to the law of Moses-“you could not have someone killed on the Passover.” This sacrilegious circumstance made it essential to the Sanhedrin who were the governing religious body of the Jews. This pious assembly needed to ensure that Jesus was dead, taken down and buried before eventide. The start of the Passover feast was a high holy day commemorating the passing over of the destroying angel and Israel’s freedom from bondage.

Caiaphas, the presiding high priest, insisted on having Jesus’s body removed speedily and heavily guarded at the tomb. This request was perplexing to Pontius Pilot, the military prefect for all of Judea. This because the Sanhedrin had orchestrated Jesus’s death sentence in the first place. These Pharisees had employed subtle and calculated schemes to end the reign of this alleged Nazarene troublemaker.

Caiaphas then explained that if Jesus’s zealot followers scurried away from his lifeless body and thus fulfilled his prophecy of achieving his personal resurrection,-then Jesus could very well be viewed as a martyred Messiah. He then he would be even more trouble dead than if he had remained alive and thus crucified in the house of his friends and therefore confirming the words of the prophets.

Pilot pondered,-“ Why and how had he that had no sin, who was innocent, and without guile on his lips cause so much turmoil in his desert outpost garrison?”

The Romans did not take convicted criminals down from the heights of wooden crosses after their long and lingering killings. They were left up and rotted in a festering feast for flies, crows, and ravenous Ravens. Crucifixion was a harsh warning to all passersby. It was a stern reminder of what to expect for committing high crimes or daring to challenge the supremacy of the Roman Empire.

The Nazarene suffered a merciless spectacle witnessed by the scourging of scorpions. The weight of the world was then placed on his shoulders and this the very tree of his execution. Sharp gore encrusted spikes were hastily employed to make an exceptional point of torment for this persecuted Rabbi. Nails punctured the soft skin of open palms. With the fear of tarring flesh nails pierced the sure place between the strong bones of the wrists to support the weight of his ripped and quivering innocence. A small standing plate was mounted below the souls of blistered feet to help support a prolonged and agonizing end. A rude placard was hastily scribbled mocking his title, ‘king of the Jews.’ hung prominently just over his crown of thorns in words that could not be mistaken by any and all present.

Agony hung in the air thick and unyielding until the ninth hour when he was heard to say in a loud voice, “Eli, Eli, lama sabachina,” that is to say, My God, my God, why hast thou forsaken me? The torment only known to the souls in Hell was the very depth of his suffering. Going below all things, he could now rise above all things and now knowing all things said,” Father, into thy hands, I commend my spirit: and having said thus, he gave up the ghost. 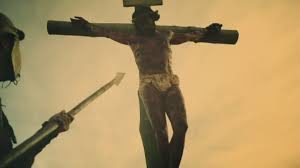 The spear of Longinus

The sticking misgivings of the rigid Pharisees observed the letter of the law giving thrust to the spear of Longinus. The spike was used to confirm Jesus’s death by a sharp stab to the soft flesh just below the rib cage and in line with the underbelly.  Water and blood gushed out from the gaping wound proving that his heart had stopped pumping and that the last of his life-giving blood had all been used up. The need to break legs to speed up the killing process before the rapidly approaching sunset was no longer necessary. Grave’s had yawned opened, and the long dead once again walked amongst the living. The temple veil was rent in twain as it was no longer necessary. The separation was now bridged, The Christan book and the heavens were again opened in the meridian of times.

According to the Christian bible, the three requirements for the paschal lamb were that it had to be without spot or blemish and that no bones were found to be either splintered or broken.

The name of the Saturday between Good Friday and Easter Sunday is Rumor Saturday because there were rumors of trickery, rumors of Egyptian black magic, and rumors that Jesus’s followers had fooled  Jerusalem with an elaborate conspiracy.

Everyone waited to witness if the dutifully guarded body would disappear and then reemerge alive, unharmed, and perfect as promised. It was the time of wagging tongues and gossip mongers. Was this lowly Nazarene Carpenter truly the Holy Messiah foretold by Isaiah?

For the natural man is an enemy to God and has been since the fall of Adam. The winter of doubt only prolongs the chill of separation from the tender mercies of an all-loving heavenly Father.  Spring does come with the promise of renewal and the resurrection. By Summertime, the glow of sunlight fans the warm breeze of reconciliation. Fishers cast their nets to gather in the faithful and cotton is spun to make spotless white the garments of the penitent. The Christian era had begun.