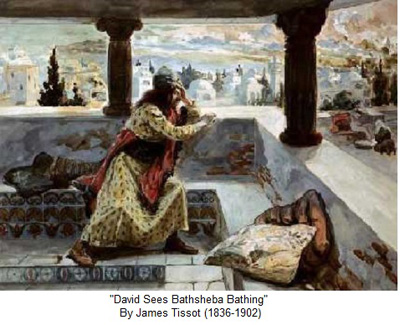 As you know, your grandfather Ahithophel’s mansion is directly adjacent and slightly below the king’s rooftop garden. I have observed David often engaged in his regular and predictable evening ritual. His maidservant known for her gossip when she is in her cups confided in me that David rests most days and arises just before sundown, the time of poets and philosophers. He goes up directly to his rooftop garden alone most every day when he is in attendance for quiet prayer and meditation. David is known for staying up late and long into the night.

Bathsheba shook her head. What are you getting at Almah? Almah, with a wicked wink, laid out her plan of conspiracy and seduction. Ahithophel’s rooftop has a mikveh, the ceremonial bath that can collect rainwater and purify you from your uncleanness once your regular issue of blood had ended and then judged sanctified by the law, but not until after sundown. At the very same time, I might add, that David will be on his rooftop retreat and in full view of your natural beauty, just like God made you.” “I am both puzzled and enchanted by your outrageous proposal,” Bathsheba curiously continued, “But he already has six wives, does he not?” “Yes, my lady, he does, but he also has a keen eye for beautiful women. David is brilliant; he is handsome as he is virile and a renowned poet-musician. There is no prohibition in the Torah for the number of wives a man might acquire. It is good to consider that David is king, and no one says no to the king for such would be treason.”

“Bathsheba lamented, “There is a flaw in your cunning plan for I have not had an issue of blood since the dreadful end to my pregnancy. I believe God has sealed up my womb and has taken away my creative spark.” Almah, would not be dissuaded, and said as much, “Your flow will begin again, I know it, and your health renewed. A new life will be your reward for God blesses his faithful. When your issue of blood ceases the ritual mikveh bath filled to the brim with rainwater will purify your unclean period. Then and only then we will be ready to entice the unsuspecting prince on the roof of your grandfather’s mansion.”

Just as Almah had predicted, Bathsheba’s natural monthly cycle reappeared with cramping, fatigue, and eruptions of anger. Almah was delighted that her prophetic insight had so rapidly come to pass. Almah insisted, “It is time to prepare, we will go to the mansion and help make ready for the mikveh bath. Your timing is crucial; you need to be exiting the tub just as David approaches the very edge of his overhead balcony. The sun still emitting enough light so that he can feast his eyes on your youthful nakedness, glistening wet, vivid, and striking.

Early afternoon found the two plotters setting off for the house of Ahithophel. “If we are well-prepared fate and luck will ensure our success.” Almah quipped. “Where is Uriah, your doting husband, will he not be curious as to your whereabouts?” Bathsheba shook her head, “No, not at all; he is on a training mission in the desert. There is some invasion or big battle about to take place. Uriah is very closed-mouthed about such happenings.”

The two women briskly approached the mansion they entered freely being recognized as family.” Where is my grandfather, Bathsheba inquired?” The head servant replied, “The master is away in a foreign land, an ambassador promoting the goodwill of the king. I believe he is on a trading mission to Egypt” The two women smiled at each other for the timing of Ahithophel’s absence could not have made things easier.

Almah, addressed the head servant, “We need to prepare the mikveh for my lady’s purification ritual. Gather up the rainwater from the rooftop cisterns. Heat the water at the downstairs hearth and fill the tub until it is steaming hot. Most importantly make sure everything stands ready so that my lady can enter into the water shortly before sundown and while the light from the dying sun still lingers on the horizon.”

All the needful things were in their proper place. The sun and the stage were both ready to set.

Bathsheba disrobed her stunning figure brightening the dimming light. She slipped into the steamy brazen tub moaning with delight — the warm water began caressing her tingling flesh and heightening her senses.

Almah kept a watchful eye until she spotted David’s long shadow approaching from his upper gallery. Almah hissed, “He comes.” At the perfect moment, Bathsheba stood up dripping wet, water droplets glistening in the freshly lit torchlight. She refrained from looking up as she felt hungry eyes drinking in her primal beauty.

David was enchanted, a tempest of lust washed over him with every sensual gesture. His eyes are straining against the deepening dark for one more fading glimpse of this mysterious vixen. The two women hoisted the flaming torches and disappeared behind closed doors leaving a void where only moments before David’s exotic fantasy was born.

David still reeling from the hot sweat of passion desperately inquired of all his household servants, saying, “A strange woman has suddenly appeared like a water nymph bathing on Ahithophel rooftop bath. Who is this bewitching creature?