“This second-giving of the law.”

What did Jesus write in the dirt? As he heard the accusations against Mary of Magdalene

7 The hands of the witnesses shall be first upon him to put him to death, and afterward the hands of all the people. So thou shalt put the evil away from among you.

And the scribes and Pharisees brought unto him a woman taken in adultery; and when they had set her in the midst,

4 They say unto him, Master, this Woman was taken in adultery, in the very act.

5 Now Moses in the law commanded us, that such should be stoned: but what sayest thou?

6 This they said, tempting him that they might have to accuse him. But Jesus stooped down, and with his finger wrote on the ground, as though he heard them not.

7 So when they continued asking him, he lifted up himself and said unto them, He that is without sin among you, let him first cast a stone at her.

8 And again, he stooped down and wrote on the ground.

What did Jesus write when he stooped down the second time?

Jeremiah 17:13
13 O Lord, the hope of Israel, all that forsake thee shall be ashamed, and they that depart from me shall be written in the earth, because they have forsaken the Lord, the fountain of living waters.

9 And they which heard it, being convicted by their own conscience, went out one by one, beginning at the eldest, even unto the last: and Jesus was left alone, and the Woman standing in the midst.

10 When Jesus had lifted up himself and saw none but the Woman, he said unto her, Woman, where are those thine accusers? Hath no man condemned thee?

11 She said, No man, Lord. And Jesus said unto her, Neither do I condemn thee: go, and sin no more.

James 1:5
5 If any of you lack wisdom, let him ask of God, that giveth to all men liberally, and upbraideth not; and it shall be given him.

Please consider that Jesus is writing on the hard rocky ground, not on soft beach sand.  He is writing in the dust, not for anyone else but as a reminder to himself where the law was found.  In Jeremiah 17:13  And at that moment he is fulfilling the scripture as he is writing it upon the earth.

Your brother in Christ Jesus

Abigail, the comely daughter of Carmel.

“When we had parted, my eyes rebelled and would not allow me to look away. You are etched forever in my waking memory. I stare up at passing clouds only to see the outline of your face.

I long for sleep, so in the night, you might invade my dreams. So when I saw that you had turned back ever so slightly to see me standing there, my heart soared in ecstasy. I have been downcast in my imaginings for the desperate need of your company. Yet, my delight resounds with heated passion at the mere thought of your embrace. I vividly recall your stunning beauty, depth of wisdom, and your unconquerable leap of faith. I long to caress you and seek shelter in your arms, Abigail. You spark in me an unquenchable fire scorching my soul with loves eternal promise. I would be happy to satisfy your every wish, want, and desire. I would place you on a pedestal higher than my anointed throne. Say yes to be my wife, and such happiness you have never known will be ours forevermore.

Gideon: The Sound and the Glory. David: God’s Chosen Crucible.

Your David, son of Jesse. 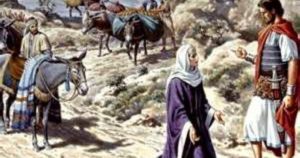