In this innovative debut, book lovers find themselves in the very midst of ancient conflicts, only to be swept away with an entirely fresh perspective on mystical teachings found in scripture – now living lessons – filled with action.

Author Joseph Ganci has announced the release of his spiritually inspiring book, ‘Gideon: The Sound and the Glory.’

Ganci pierces the veil with a penetrating vision of long held Bible mysteries that are far and away daring and unusual. He works within a framework of an engaging and dramatized fiction that, while exceedingly rich in detail, remains faithful to uphold spiritual principles. He bases his work on three primary pillars:

The rock-solid cornerstone is biblical history and geography.
The creative arch is revelatory in its timing and issues.
The research is concrete, firmly rooted in customs, languages, and traditions.

Unsung heroes and murderous villains, hidden forever in ancient shadows, now leap to life – blazing onto the pages of revelation. Gideon, a lowly woodcutter, is blessed by an angel to be the savior of all Israel. He does not know why or how and shrinks from this dangerous mission. The commandment to conquer the Midian Empire as one man seems all but impossible. But Gideon’s confidence grows as God guides his every step until he stands fearless and faithfully fulfills his destiny as, “A mighty man of valor.” The fierce warriors, burning towers and devastated cities contained in Gideon’s Journey, are but silver threads that weave into a sweeping tapestry of ancient intrigue. Running through and stitching together the entire saga is The Lord of the Covenant, or The Baal-Berith, also known as Gideon’s mysterious Ephod of Gold. 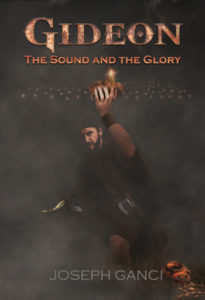 “I wrote this book,” Ganci stated, “as one day I was reading the Bible, and it was my fifth pass from cover to cover. I had just reached Judges Six when a phrase leaped off the page – And Gideon sent messengers throughout all mount Ephraim, saying, come down against the Midianites, and take before them ‘the waters unto Bethbarah’ and Jordan.”

“I started digging down and found it meant the shallow waters and the only fording place of the entire Jordan River. It was in effect a military dispatch – directing the army of Ephriam to cut off the desperate flight of the remaining Midian camel cavalry. Gideon would drive the enemy like hounds to the hunter. A long-held mystery started, to unravel, and with that, I was off to the races.”

‘Gideon: The Sound and the Glory’ has received rave reviews from readers and reviewers alike. A recent reviewer stated, “Joseph Ganci’s prose is arresting, peppered with wonderful imagery and succinct descriptions of plot, characters, and setting. The themes are masterfully created, and they are woven into the story in a way that allows the reader to enjoy both the inspiration the story offers and the accompanying action. The book explores powerful spiritual and political themes, capturing the conflicts and the dynamics of life within the community of God’s chosen people. Gideon: The Sound and the Glory will appeal to fans of political thrillers, adventure, and conflict-driven stories that are laced with intense action.” Other reviewers have used phrases such as “riveting,” “amazing” “deftly crafted” and “highly recommended.”